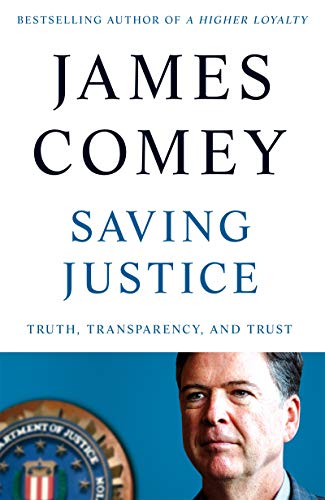 From James Comey, former FBI director and the number one bestselling author of A Higher Loyalty, Saving Justice is about how truth and the institutions of justice have been eroded under Donald Trump and how they can be restored.

James Comey, former FBI Director and Sunday Times number one bestselling author of A Higher Loyalty, uses his long career in federal law enforcement to explore issues of justice and fairness in the US justice system.

James Comey might best be known as the FBI director that Donald Trump fired in 2017, but he's had a long, varied career in the law and justice system. He knows better than most just what a force for good the US justice system can be, and how far afield it has strayed during the Trump Presidency.

In his much-anticipated follow-up to A Higher Loyalty, Comey uses anecdotes and lessons from his career to show how the federal justice system works. From prosecuting mobsters as an Assistant US Attorney in the Southern District of New York in the 1980s to grappling with the legalities of anti-terrorism work as the Deputy Attorney General in the early 2000s to, of course, his tumultuous stint as FBI director beginning in 2013, Comey shows just how essential it is to pursue the primacy of truth for federal law enforcement.

Saving Justice is gracefully written and honestly told, a clarion call for a return to fairness and equity in the law.

An absolutely fascinating read for anyone who wants to understand the workings of the US Justice System and American Politics more broadly. -- Emily Maitlis

'The Capitol riot was our Chernobyl...I was sickened to watch an attack on the literal and symbolic heart of our democracy, and, as a law enforcement person, I was angered. I am mystified and angry that Capitol Hill wasn't defended. It's a hill! If you wanted to defend it, you could defend it, and for some reason it was not defended. I think that's a 9/11-size failure and we're going to need a 9/11-type commission to understand it so that we don't repeat it.' (Guardian interview, 19th Jan 2021)

'The Republican party needs to be burned down or changed. Something is shifting and I'm hoping it's the fault breaking apart, a break between the Trumpists and those people who want to try and build a responsible conservative party, because everybody should know that we need one. Who would want to be part of an organisation that at its core is built on lies and racism and know-nothingism? It's just not a healthy political organisation.' (Guardian interview, 19th Jan 2021)

'I just think, on balance, the country is better served by impeaching him [Trump], convicting him in the Senate and letting local prosecutors in New York pursue him for the fraudster he was before he took office.' (Guardian interview, 19th Jan 2021)

On September 4, 2013, James Comey was sworn in as the seventh director of the FBI.

A native of Yonkers, New York, Comey attended the College of William and Mary and the University of Chicago Law School. Afterwards, Comey returned to New York and joined the US Attorney's Office for the Southern District of New York as an assistant US attorney. There, he took on numerous crimes, most notably organized crime in the case of the United States v. John Gambino, et al. Comey then became an assistant US attorney in the Eastern District of Virginia, where he prosecuted the high-profile case that followed the 1996 terrorist attack on the US military's Khobar Towers in Khobar, Saudi Arabia.

Comey returned to New York after 9/11 to become the U.S. attorney for the Southern District of New York. At the end of 2003, he was tapped to be the deputy attorney general at the Department of Justice (DOJ) under then-U.S. attorney general John Ashcroft and moved to the Washington, D.C. area.

Comey left the DOJ in 2005 to serve as general counsel and senior vice-president at defence contractor Lockheed Martin. Five years later, he joined Bridgewater Associates, a Connecticut-based investment fund, as its general counsel. In early 2013, Comey became a lecturer in law, a senior research scholar and Hertog Fellow in national security law at Columbia Law School.

After he was fired as FBI Director, Comey held the King Lecture Chair in Public Policy at Howard University for 2017-18 and served as a Distinguished Lecturer in Public Policy at William and Mary for 2018-2019. In September 2020, his first book, A Higher Loyalty, was made into a Showtime limited series, The Comey Rule.