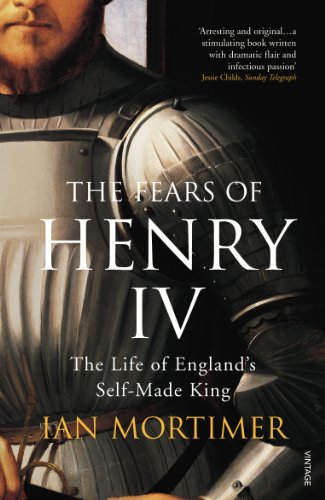 In June 1405, King Henry IV stopped at a small Yorkshire manor house to shelter from a storm. In 1399, at the age of thirty-two, he was enthusiastically greeted as the saviour of the realm when he ousted from power the insecure and tyrannical King Richard II.

The Fears of Henry IV: The Life of England's Self-Made King Ian Mortimer

In June 1405, King Henry IV stopped at a small Yorkshire manor house to shelter from a storm. That night he awoke screaming that traitors were burning his skin. His instinctive belief that he was being poisoned was understandable: he had already survived at least eight plots to dethrone or kill him in the first six years of his reign.

Henry IV had not always been so unpopular. In his youth he had been a great chivalric champion and crusader. The son of John of Gaunt, he was courteous, confident, well-educated, generous, devoted to his family, musical and spiritually fervent. In 1399, at the age of thirty-two, he was enthusiastically greeted as the saviour of the realm when he ousted from power the insecure and tyrannical King Richard II.

But therein lay Henry's weakness. He had to contend with men who supported him only as long as they could control him; when they failed, they plotted to kill him. Welsh, French and Scottish adversaries also tried to take advantage of his questionable right to the crown. Such overwhelming threats transformed him from a hero into a duplicitous murderer: a king prepared to go to any lengths to save his family and his throne.

That legacy of unrest has defined Henry's subsequent reputation. Henry's notoriety in the sixteenth century was such that merely to write about him was to risk imprisonment in the Tower. Shakespeare was forced to downplay his achievements, and instead to present his adversary Richard II as the wronged man. But what Henry actually provoked was a social revolution as much as a political one. Against all the odds, he took a poorly ruled nation, established a new Lancastrian dynasty, and introduced the principle that a king must act in accordance with parliament. He might not have been the most glorious king England ever had, but he was one of the bravest, and certainly the greatest survivor of them all.

[Mortimer] has an instinctive sympathy for the men about whom he writes, a real understanding of the mentalities of late medieval England, and a vivid historical imagination which lends colour and excitement to his pages * Literary Review *
Mortimer's book is a success and tells an important story very well -- Richard Francis * Daily Telegraph *
An arresting and original biography -- Jessie Childs * Sunday Telegraph *
[It] possesses the rare combination of clarity, liveliness, balanced judgement, erudition without pedantry, and scholarship founded on his own research among primary sources * Scotland on Sunday *
The book is at its most compelling in conjuring a sense of place or occasion * Guardian *