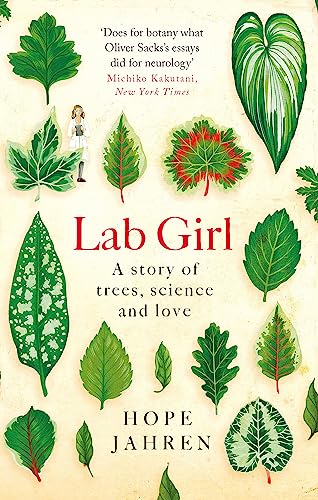 A frank, illuminating and incandescent memoir by a trailblazing scientist; a moving portrait of a longtime collaboration in work and life; and a book that casts a whole new light on the natural world.

Lab Girl is a book about work and about love, and the mountains that can be moved when those two things come together. It is told through Jahren's remarkable stories: about the discoveries she has made in her lab, as well as her struggle to get there; about her childhood playing in her father's laboratory; about how lab work became a sanctuary for both her heart and her hands; about Bill, the brilliant, wounded man who became her loyal colleague and best friend; about their field trips - sometimes authorised, sometimes very much not - that took them from the Midwest across the USA, to Norway and to Ireland, from the pale skies of North Pole to tropical Hawaii; and about her constant striving to do and be her best, and her unswerving dedication to her life's work.

Visceral, intimate, gloriously candid and sometimes extremely funny, Jahren's descriptions of her work, her intense relationship with the plants, seeds and soil she studies, and her insights on nature enliven every page of this thrilling book. In Lab Girl, we see anew the complicated power of the natural world, and the power that can come from facing with bravery and conviction the challenge of discovering who you are.

[Lab Girl] does for botany what Oliver Sacks's essays did for neurology -- Michiko Kakutani * New York Times *
Some people are great writers, while other people live lives of adventure and importance. Almost no one does both. Hope Jahren does both. She makes me wish I'd been a scientist -- Ann Patchett, author of State of Wonder and Bel Canto (winner of the Orange Prize)
Jahren's journey from struggling student to struggling scientist has the narrative tension of a novel and characters she imbues with real depth . . . Jahren transcends both memoir and science writing in this literary fusion of both genres * Kirkus *
Darkly humorous, emotionally raw and exquisitely crafted * Publishers Weekly *
This title should be required reading for all budding scientists, especially young women. However being a scientist is not essential in order to savor Jahren's stories and reflections on living * Library Journal *
Deeply affecting . . . A belletrist in the mold of Oliver Sacks, [Jahren] is terrific at showing just how science is done . . . Jahren's writing is precise, as befits a scientist who also love words. She's an acute observer, prickly, and funny as hell . . . A totally original work, both fierce and uplifting * Elle (US) *
Jahren's singular gift is her ability to convey the everyday wonder of her work: exploring the strange, beautiful universe of living things that endure and evolve and bloom all around us, if we bother to look * Entertainment Weekly *
The Jane Goodall of botany . . . I am not sure which is more extraordinary, the plants or the woman who studies them. If the next generation of scientists have role models like Jahren, then the world of science will be better off indeed * Science *
this book is delightfully, wickedly funny. I was constantly surprised by the literary tricks this first-time memoirist manages to pull off. With Lab Girl, Jahren has taken the form of the memoir and done something remarkable with it. She's made the experience of reading the book mimic her own lived experience in a way that few writers are capable of. It's a powerful and disarming way to tell a story, and I admire the craft behind it. Mostly, though, I love this book for its honesty, its hilarity and its brilliant sharp edges. Jahren has some serious literary chops * Washington Post *
Leaves become elegant machines, soil is the interface between the living and the dead, and seeds, well, they are transformed into the most patient and hopeful of all life forms. Jahren has such a passion for the natural world that it's hard to imagine her in any role other than her current one; a professor of geobiology at the University of Hawaii. Lab Girl is her engaging new memoir, which tells the story of her fight to establish and fund her own research laboratory. And it's been a fascinating journey -- Lucie Green * Observer *
Infectious, frank and finely written . . . a wonderful read * Sunday Express *
Jahren pulls no punches on the stark realities of being a woman in science . . . Lab Girl is funny, full of joyous moments and often sad * Nature *
Lab Girl reads more like a novel than a traditional science book . . . This kind of personal, bittersweet, bruised memoir is emerging as a new way of writing about science - one that will hopefully banish for good the notion that it is just for the boys -- Philip Ball * Prospect *
Science is about a passion for ideas and the people who pursue those passions. Hope Jahren captures both in her book, the engrossing story of her love of science and of the adventures she has while pursuing her hunches and hypotheses. -- Helen Pearson * Guardian *
This is an absolutely extraordinary book . . . By the end, I was babbling about it to complete strangers and determined to give a copy to just about everyone I know . . . Jahren is not just a scientist, though, but a poet who has given us insight into her mind and her passions, and I feel privileged to have been granted a glimpse * Times Higher Education Supplement *
Jahren's literary bent renders dense material digestible, and lyrical . . . a gratifying and often moving chronicle of the scientist's life * Scotsman *
Lab Girl is arguably a better motivator for a career in science than any mandatory curriculum * Discover *
Clear and compelling but also fiercely tender . . . Jahren refuses to pretend that scientists don't quite often come with more than their share of peculiarities. She captures so precisely the way they dress, talk, and occasionally misunderstand stuff that others take for granted . . . I love Jahren's enthusiasm for her work, an all-encompassing passion for which she won't apologise and which makes her indomitable -- Rachel Cooke * New Statesman *
A fascinating account of plants, love and obsession * Mail on Sunday *
[A] frank, illuminating and moving memoir . . . Hope's book casts a whole new light on the natural world * Hello *
Her memoir, rich in feeling and in facts, is an ode to her profession and to the natural world * Time *
Hope Jahren is an award-winning scientist who has been pursuing independent research in paleobiology since 1996. Recognized by Time in 2016 as one of the 100 most influential people in the world, she is the recipient of three Fulbright Awards and served as a tenured professor at the University of Hawaii in Honolulu from 2008 to 2016, where she built the isotope geobiology laboratories. She currently holds the J. Tuzo Wilson professorship at the University of Oslo, Norway.
GOR008155182
9780349006208
0349006202
Lab Girl Hope Jahren
Hope Jahren
Gebraucht - Sehr Gut
Broschiert
Little, Brown Book Group
20170302
384
Winner of American National Book Critics Circle Award for Autobiography 2017 (UK) Long-listed for Andrew Carnegie Medal for Excellence 2017 (UK)
Die Abbildung des Buches dient nur Illustrationszwecken, die tatsächliche Bindung, das Cover und die Auflage können sich davon unterscheiden.
Dies ist ein gebrauchtes Buch. Es wurde schon einmal gelesen und weist von der früheren Nutzung Gebrauchsspuren auf. Wir gehen davon aus, dass es im Großen und Ganzen in einem sehr guten Zustand ist. Sollten Sie jedoch nicht vollständig zufrieden sein, setzen Sie sich bitte mit uns in Verbindung.