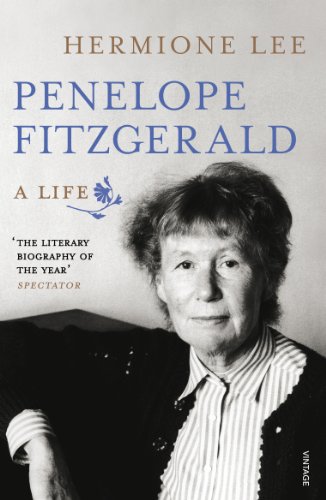 Winner of the James Tait Black Prize for Biography 2014Winner of the Plutarch Award for Best BiographyNew York Times Book Review's 10 Best Books of the YearPenelope Fitzgerald (1916-2000) was a great English writer, who would never have described herself in such grand terms.

Winner of the James Tait Black Prize for Biography 2014 Winner of the Plutarch Award for Best Biography New York Times Book Review's 10 Best Books of the Year Penelope Fitzgerald (1916-2000) was a great English writer, who would never have described herself in such grand terms. Her novels were short, spare masterpieces, self-concealing, oblique and subtle. She won the Booker Prize for her novel Offshore in 1979, and her last work, The Blue Flower, was acclaimed as a work of genius. The early novels drew on her own experiences - a boat on the Thames in the 1960s; the BBC in war time; a failing bookshop in Suffolk; an eccentric stage-school. The later ones opened out to encompass historical worlds which, magically, she seemed to possess entirely: Russia before the Revolution; post-war Italy; Germany in the time of the Romantic writer Novalis. Fitzgerald's life is as various and as cryptic as her fiction. It spans most of the twentieth century, and moves from a Bishop's Palace to a sinking barge, from a demanding intellectual family to hardship and poverty, from a life of teaching and obscurity to a blaze of renown. She was first published at sixty and became famous at eighty. This is a story of lateness, patience and persistence: a private form of heroism. Loved and admired, and increasingly recognised as one of the outstanding novelists of her time, she remains, also, mysterious and intriguing. She liked to mislead people with a good imitation of an absent-minded old lady, but under that scatty front were a steel-sharp brain and an imagination of wonderful reach. This brilliant account - by a biographer whom Fitzgerald herself admired - pursues her life, her writing, and her secret self, with fascinated interest.
"Excellent... [Hermione] Lee is a perfect choice as Fitzgerald's biographer. She has done a superb job, capturing an elusive personality and a complex, sometimes rather harrowing story." -- Philip Hensher * Guardian *
"Lee elucidates the depth of [Fitzgerald's] achievement, and ties it enthrallingly to a life and personality more complex and difficult than anyone imagined. In a perfect literary biography, Lee plumbs the creative mind beneath that persona, tracing the metamorphosis of messy experience into crystalline art." * Financial Times *
"Brilliant and passionate...a haunting tale of blighted hope, personal tragedy and rare, late fulfilment. Thanks to this sympathetic biography, [Fitzgerald's] afterlife shows signs of becoming finally blessed with understanding, admiration and respect." -- Robert McCrum * Observer *
"Admirable and perceptive... Hermione Lee non-judgmentally excavates this extraordinary life. Her biography is very good indeed" -- Susan Hill * The Times *
"A worthy monument to one of the finest English novelists of the second half of the 20th century" -- Jonathan Derbyshire * Prospect *
"Adroitly executed and meticulously researched... insightful... Ms Lee's shrewd examination makes this a riveting biography" * Economist *
"Lee's absorbing biography is the story of a late starter... [She] is partisan in her project: she means to expose a truth she is certain of -- that Fitzgerald is "a great English writer". Her feat is to have woven an involving narrative out of such a skeletal life....Excellent...." -- Nicholas Shakespeare * Telegraph *
"This book will hold insights and treats for any admirer of [Fitzgerald's] fiction, and recruit converts to this reticent, witty, ferocious champion of the utterly downtrodden." -- Emma Townshend * Independent *
"Her book is in the very best tradition of critical literary biography. Phenomenally well researched and elegantly written, with a fine, dynamic fluency and lucid understanding, this is a very good biography indeed." * The Tablet *
"This elegant, richly researched biography tells a tale of misfortunes borne with dignity, humour and courage, and finally of quiet triumphs" -- Michele Roberts * i *
"The literary biography of the year" -- Philip Hensher * Spectator *
"A perfect match of author and subject" -- Leo Robson * New Statesman *
"Lee's book has had more influence on my reading than anything else this year" -- John Lanchester * Guardian *
"A compelling account of the life and work of Penelope Fitzgerald" -- Mark Lawson * Guardian *
"A masterly discussion of the work of that fine novelist and an illuminating account of the life of a complex and elusive person" -- Penelope Lively * Guardian *
Hermione Lee is a biographer, critic, and teacher of literature. Her previous books include the internationally acclaimed biography, Virginia Woolf ('One of the most impressive biographies of the decade: moving, eloquent, powerful', Financial Times) and Edith Wharton ('A feat of exhaustive research... a glorious biography', Independent on Sunday), as well as books on Elizabeth Bowen, Willa Cather and Philip Roth. Her collection of essays on life-writing, Body Parts, was published in 2005, and her Biography: A Very Short Introduction in 2009. She is the President of Wolfson College Oxford. In 2013 she was made a Dame for services to Literary Scholarship. She lives in Oxford and Yorkshire.
GOR006286724
9780099546597
0099546590
Penelope Fitzgerald: A Life Hermione Lee
Hermione Lee
Gebraucht - Sehr Gut
Broschiert
Vintage Publishing
2014-11-03
544
Winner of James Tait Black Award for Biography 2014 (UK)
Die Abbildung des Buches dient nur Illustrationszwecken, die tatsächliche Bindung, das Cover und die Auflage können sich davon unterscheiden.
Dies ist ein gebrauchtes Buch. Es wurde schon einmal gelesen und weist von der früheren Nutzung Gebrauchsspuren auf. Wir gehen davon aus, dass es im Großen und Ganzen in einem sehr guten Zustand ist. Sollten Sie jedoch nicht vollständig zufrieden sein, setzen Sie sich bitte mit uns in Verbindung.