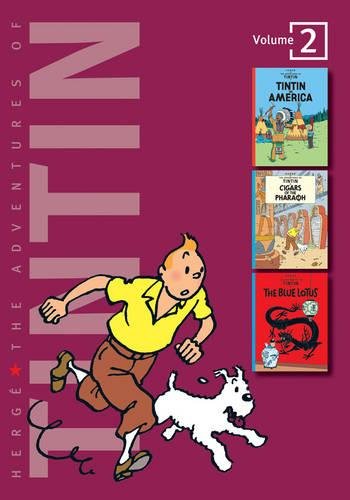 Includes - "Tintin in America", "The Cigars of the Pharaoh", "The Blue Lotus"

Join the world's most famous travelling reporter in three exciting adventures as he heads for America, Egypt and India.

Gangsters, Cowboys, Indians and the Big Apple await Tintin when he travels across the Atlantic to America. He soon finds himself in terrible danger - but with Snowy to help him, he faces it head on . . .

Cigars of the Pharaoh

On the hunt for an Egyptologist and a mysterious ancient pharaoh, Tintin scours Egypt and India. He makes friends with elephants, narrowly avoids falling victim to the poison of madness and saves a maharajah from a killer tiger.

In India, Tintin gets drawn into a dangerous mystery revolving around a madness-inducing poison. He traces its origins to Shanghai and a nefarious web of opium traffickers. But can he outwit the crooks?

Join the most iconic character in comics as he embarks on an extraordinary adventure spanning historical and political events, and thrilling mysteries.

Still selling over 100,000 copies every year in the UK and having been adapted for the silver screen by Steven Spielberg and Peter Jackson in 2011, The Adventures of Tintin continue to charm more than 80 years after they first found their way into publication. Since then an estimated 230 million copies have been sold, proving that comic books have the same power to entertain children and adults in the 21st century as they did in the early 20th.