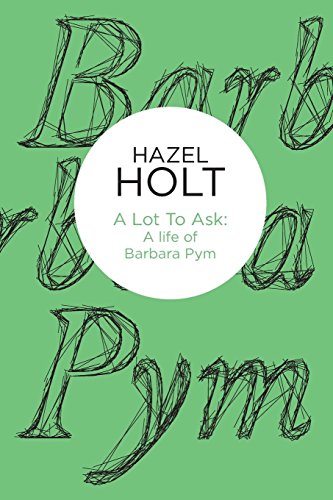 A Lot to Ask Hazel Holt

The life of the author of Quartet in Autumn, Jane and Prudence, and Excellent Women

A Lot to Ask: A Life of Barbara Pym Hazel Holt

Barbara Pym is a writer of whom it may be truly said that her life is reflected in her work. This definitive biography puts Barbara in her setting and relates her life to the age and the world in which she lived.

Drawing on a wealth of previously unpublished material and with the help of Barbara's sister Hilary and her friends (including Philip Larkin, Robert Liddell, Henry Harvey and Robert Smith, Hazel Holt, her friend and literary executor, has drawn a perceptive portrait of Barbara Pym, the woman as well as the novelist.

From the heady atmosphere of pre-war Oxford where she embarked upon a series of highly romantic love affairs, through her wartime service in the WRNS, to early success as a published writer, we come to know a person whose humour and sharp observation were uniquely combined with a compassionate acceptance of human nature - qualities that made her such an outstanding novelist.

Hazel Holt also describes the dark period from 1963, when Barbara Pym's novels were rejected as unpublishable, through the wilderness years until 1977 when her literary reputation was triumphantly re-established by Philip Larkin and Lord David Cecil.

Barbara Pym emerges from these pages as an entertaining companion with an insatiable curiosity and an unquenchable delight in the eccentricities of her fellows. Readers already acquainted with her novels will find great pleasure in this biography and those who are not will be irresistibly drawn towards the world of Barbara Pym.

'We may now say Barbara Pym and be understood instantly.' Shirley Hazzard

'Whom do people turn to when they've finished Barbara Pym? The answer is easy: they turn back to Barbara Pym.' Anne Tyler