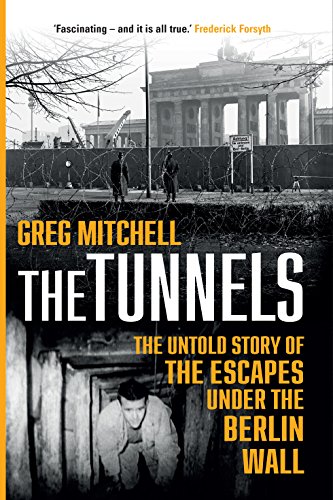 In the summer of 1962, one year after the rise of the Berlin Wall, a group of daring young West Germans risked prison, Stasi torture and even death to liberate friends, lovers, and strangers in East Berlin by digging tunnels under the Wall.

The Tunnels: The Untold Story of the Escapes Under the Berlin Wall Greg Mitchell

In the summer of 1962, one year after the rise of the Berlin Wall, a group of daring young West Germans risked prison, Stasi torture and even death to liberate friends, lovers, and strangers in East Berlin by digging tunnels under the Wall. Then, as the world's press heard about the secret projects, two television networks raced to be the first to document them from the inside, funding two separate tunnels for exclusive rights to film the escapes. In response, President John F. Kennedy and his administration, wary of anything that might raise tensions and force a military confrontation with the Soviets, maneuvered to quash both documentaries. As Greg Mitchell's riveting narrative unfolds, we meet extraordinary characters: the legendary cyclist who became East Berlin's most wanted man; the tunneller who had already served four years in the East German gulag; the Stasi informer who betrays the `CBS tunnel'; the young East Berliner who escapes with her baby, then marries one of the tunnellers; and an engineer who would later help build the tunnel under the English Channel. Capturing the hopes and fears of everyday Berliners, the chilling reach of the Stasi secret police, and the political tensions of the Cold War, The Tunnels is breaking history, a propulsive read whose themes still reverberate today.
"A story with so much inherent drama it sounds far-fetched even for a Hollywood thriller... Mitchell tells a kaleidoscopic cold war story from 1962, recreating a world seemingly on the edge of a third world war." * The Guardian *
"A fascinating and complex picture of the interplay between politics and media in the Cold War era." * The Washington Post *
"The greatest strength of The Tunnels is in the details... Days after finishing the book I could not escape one of Mitchell's images - of a hat with a small hole in it landing softly on the Western side of the border while its owner's dead body fell back into the East, waiting for the guards to hurry it out of sight. For those who see walls as the answer to policy problems, this book serves as a stark reminder that barriers can never cut people off entirely but only succeed in driving them underground." * New York Times Book Review *
"The Tunnels is one of the great untold stories of the Cold War. Brilliantly researched and told with great flair, Greg Mitchell's non-fiction narrative reads like the best spy thriller, something le Carre might have imagined. Easily the best book I've read all year." -- Alex Kershaw, author of Avenue of Spies
"Every hour of my year in East Berlin - 1963/64 - the escape tunnels beneath our feet were being dug. This is their story: those who dug them, those who used them and those who betrayed them to the Stasi. Fascinating - and it is all true." -- Frederick Forsyth
"I was stunned by the tunnelling exploits detailed by Greg Mitchell. This intricately detailed account was eye-opening and an exhilarating read. Not knowing who made it out of the East, and who was arrested, or worse, kept me glued to this book until the last page. [An] important work." -- Antonio Mendez, author of Argo
"An extraordinarily revealing political thriller... Mitchell presents us with a radically changed perspective on one of the Cold War's most dramatic episodes. His book is both priceless as history and just about impossible to beat for sheer narrative grip." -- Frederick Taylor, author of The Berlin Wall
"Greg Mitchell's The Tunnels uncovers an unexplored underworld of Cold War intrigue. As nuclear tensions grip Berlin, a whole realm of heroes and villains, of plot and counterplot, unfolds beneath the surface of the city. True historical drama." -- Ron Rosenbaum, author of Explaining Hitler and How The End Begins
"When you have read the last page of Greg Mitchell's The Tunnels you will close the book. But not until then." -- Alan Furst, author of A Hero of France and Night Soldiers
"Greg Mitchell is the best kind of historian, a true storyteller. The Tunnels is a gripping tale about heroic individuals defying an authoritarian state at a critical moment in the Cold War. A brilliantly told thriller-but all true." -- Kai Bird, author of The Good Spy
"A compelling look at a wrenching chapter of the Cold War that chronicles the desperate flights for freedom beneath the streets of post-war Berlin and the costs that politics extracted in lives" -- Barry Meier, author of Missing Man
"A riveting story. Mitchell, an exemplary journalist, goes deep into the political dynamics of Cold War Berlin. John Le Carre couldn't have done it better." -- Bill Moyers
"A narrative full of interest and acute observation." -- Allan Massie * The Scotsman *
"Tense, fascinating... Mitchell delivers a gripping, blow-by-blow account." * Publishers Weekly *
"A gripping page-turner that thrills like fiction." * Kirkus Reviews *
GREG MITCHELL is the author of nearly a dozen books, including The Campaign of the Century, winner of the Goldsmith Book Prize. He is the former editor of Editor & Publisher.
GOR007798599
9780593075968
059307596X
The Tunnels: The Untold Story of the Escapes Under the Berlin Wall Greg Mitchell
Greg Mitchell
Gebraucht - Sehr Gut
Gebundene Ausgabe
Transworld Publishers Ltd
2016-10-20
400
N/A
Die Abbildung des Buches dient nur Illustrationszwecken, die tatsächliche Bindung, das Cover und die Auflage können sich davon unterscheiden.
Dies ist ein gebrauchtes Buch. Es wurde schon einmal gelesen und weist von der früheren Nutzung Gebrauchsspuren auf. Wir gehen davon aus, dass es im Großen und Ganzen in einem sehr guten Zustand ist. Sollten Sie jedoch nicht vollständig zufrieden sein, setzen Sie sich bitte mit uns in Verbindung.