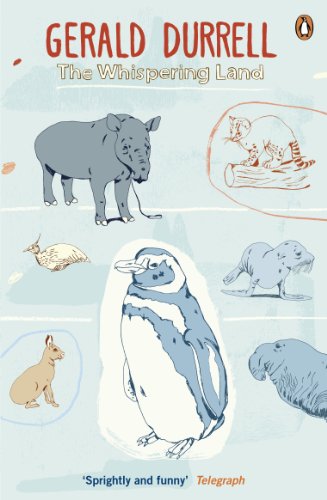 The author and his wife are the proud owners of a small zoo on the island of Jersey. But there's one thing that's better than a small zoo - a bigger one. So the author heads off to South America to collect more animals. This title offers an account of his journey into the South American wilds.

'When you have a large collection of animals to transport from one end of the world to the other you cannot, as a lot of people seem to think, just hoist them aboard the nearest ship and set off with a gay wave of your hand.'

Gerald Durrell and his wife are the proud owners of a small zoo on the island of Jersey. But there's one thing that's better than a small zoo - a bigger one! So Durrell heads off to South America to collect more animals.

Along windswept Patagonian shores and in Argentine tropical forests, he encounters a range of animals from penguins to elephant seals. But as always, he is drawn to those rare and interesting creatures which he hopes will thrive and breed in captivity . . .

Told with enthusiasm and without sentimentality, Gerald Durrell's The Whispering Land is an often hilarious but always inspiring foray into the South American wilds.

Animals come close to being Durrell's best friends. He writes about them with style, verve and humour * Time *
An amusing writer who transforms this Argentine backcountry into a particularly inviting place * San Francisco Chronicle *
A splendid success * New Yorker *
A delight, with never a dull moment from Buenos Aires to Patagonia, thanks to Durrell's extraordinary ability to communicate his exuberant pleasure in his chosen work * New York Times *
Gerald Durrell was born in Jamshedpur, India, in 1925. He returned to England in 1928 before settling on the island of Corfu with his family. In 1945 he joined the staff of Whipsnade Park as a student keeper, and in 1947 he led his first animal-collecting expedition to the Cameroons. He later undertook numerous further expeditions, visiting Paraguay, Argentina, Sierra Leone, Mexico, Mauritius, Assam and Madagascar. His first television programme, Two in the Bush which documented his travels to New Zealand, Australia and Malaya was made in 1962; he went on to make seventy programmes about his trips around the world. In 1959 he founded the Jersey Zoological Park, and in 1964 he founded the Jersey Wildlife Preservation Trust. He was awarded the OBE in 1982. Encouraged to write about his life's work by his brother, Durrell published his first book, The Overloaded Ark, in 1953. It soon became a bestseller and he went on to write thirty-six other titles, including My Family and Other Animals, The Bafut Beagles, Encounters with Animals, The Drunken Forest, A Zoo in My Luggage, The Whispering Land, Menagerie Manor, The Amateur Naturalist and The Aye-Aye and I. Gerald Durrell died in 1995.
GOR004992553
9780241955840
024195584X
The Whispering Land Gerald Durrell
Gerald Durrell
Gebraucht - Sehr Gut
Broschiert
Penguin Books Ltd
2012-09-06
224
N/A
Die Abbildung des Buches dient nur Illustrationszwecken, die tatsächliche Bindung, das Cover und die Auflage können sich davon unterscheiden.
Dies ist ein gebrauchtes Buch. Es wurde schon einmal gelesen und weist von der früheren Nutzung Gebrauchsspuren auf. Wir gehen davon aus, dass es im Großen und Ganzen in einem sehr guten Zustand ist. Sollten Sie jedoch nicht vollständig zufrieden sein, setzen Sie sich bitte mit uns in Verbindung.