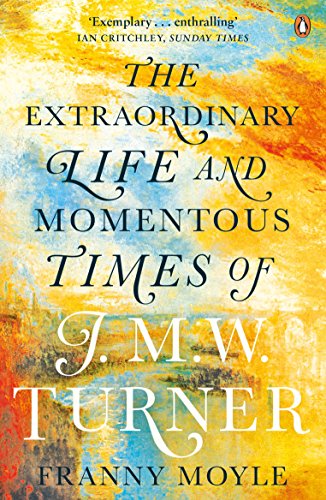 The man behind the paintings: the extraordinary life of J. M. W Turner, one of Britain's most admired, misunderstood and celebrated artists

J. M. W. Turner is Britain's most famous landscape painter. Yet beyond his artistic achievements, little is known of the man himself and the events of his life: the tragic committal of his mother to a lunatic asylum, the personal sacrifices he made to effect his stratospheric rise, and the bizarre double life he chose to lead in the last years of his life.

A near mythical figure in his own lifetime, Franny Moyle tells the story of the man who was considered visionary at best and ludicrous at worst. A resolute adventurer, he found new ways of revealing Britain to the British, astounding his audience with his invention and intelligence. Set against the backdrop of the finest homes in Britain, the French Revolution and the Industrial Revolution, this is an astonishing portrait of one of the most important figures in Western art and a vivid evocation of Britain and Europe in flux.

An exemplary work... Moyle explores the whole of his long life, expertly charting the artist's development from his precocious conquering of the Royal Academy to his late, experimental paintings.
Moyle is especially good at delineating Turner's artistic methods and her enthralling account is filled with an impressive understanding of his unique talent.

A thorough, balanced and wonderfully fluent account. Franny Moyle [is] one of the best in the long line of [Turner's] biographers
One of Turner's many achievements was to paint Britain in all its moods ... and show his peers the real nature and variety of their own country. In her immaculate biography Moyle has done something similar with the man himself.

-- Michael Prodger * Times *
Fresh and lively ... Turner's life is given a vivid colour and depth as Moyle deftly interweaves his professional career with his private life. Moyle writes with sensitivity about individual pictures and series, and is good at explaining the context -- Jenny Uglow * BBC History Magazine *

Elegant and thorough.
Moyle's superb evocation of these aspects of her subject allows us to see Turner less as the "misunderstood genius" who moved in a sphere untouched by the realities of the day, and "more as an arch manipulator and central player in the great game of art that evolved across the late 18th and 19th centuries, a man praised to the hilt by a great many of his contemporaries [who] acknowledged his significance in the creation of the idea of the independent artist".
It is to Moyle's credit that she is able to make this persuasive case while narrating Turner's life with verve, intelligence and insight, and while bringing to life the world in which he lived with care and subtlety. This is a biography that leaves you with a fresh impression of both Turner and his time. It frees its subjects from myth, and imbues them with the quality of wonder.

-- Matthew Adams * I News *
Moyle is good on Turner's momentous times, interweaving history, the history of art and the public's attitude toward art. -- Claudia Fitzherbert * Telegraph *

It is hard, on one level, to believe his sublime canvases ... come with a character attached at all. But Moyle tells the human story well in a book of rigorous scholarship and beauty.

She offers an earthy, warts-and-all depiction of the Romantic master JMW Turner that is shaped by the dogged realism of a low-born man who had an exceptional artistic vision.

This is well written and meticulously researched.

All we once had left of Turner were his paintings, now we have another vibrant biography to commemorate his art, and where it took us.

Franny Moyle tells a compelling story of a self-taught prodigy... A restless painter who always sought new forms of expression in watercolour and oils.

Moyle is an unpretentious art historian, and she has written an inviting and easily digested biography of the best of British painters

-- Stephen Fay * Economist *
Of the two recent books on Turner, Moyle's is the more satisfying, not least because it allows for the intimacy of reading. Less is more when it comes to biography - and Moyle gives Turner's restless life a perspective and a frame -- Frances Wilson * New Statesman *
Very well researched . . . Moyle achieves an unusual level of empathy * Time Out (on 'Desperate Romantics') *
Moyle's art-historical perceptions make this detailed and beautifully balanced biography a compelling read... Turner emerges from it larger... revealed as a man of his moment -- Brian Morton * Scottish Herald *
The words on the page offer views every bit as captivating as Turner's ageless panoramas * Big Issue *
A fat, satisfying popular history of the man who was arguably Britain's greatest painter * Financial Review *

Miss Moyle tells a very good story. She is sound on the art without allowing art historicism to
weigh her down. She is also excellent on the complicated politics of the Royal Academy. We get a feel for the man in all his cantankerousness and eccentricity, but she also brings out the humour and -at least after he had made his own fortune-the generosity, especially towards his fellow artists

-- Huon Mallalieu * Country Life *
Moyle is consistently perceptive about Turner's work, especially the way in which he sought to portray both what he could see in front of him and what he couldn't see - things like air and space. Her narrative is as colourful as it is pacy. -- John Preston * Daily Mail *
What Ruskin misses, but Moyle writes about so persuasively, is Turner's ambition -- Laura Freeman * Mail on Sunday *
Moyle is excellent at establishing these stylistic contexts. ... her art-historical perceptions are what make this detailed and beautifully balanced biography so compelling a read. It's rare that one finishes a modern biography feeling that the subject has been enhanced and not merely dissected. McKern and Spall can step aside. The real Turner is onstage * Herald *
Franny Moyle studied Art History at St John's College, Cambridge. She enjoyed a career in arts programming at the BBC that culminated in her becoming the corporation's first Commissioner for Arts and Culture. She is now a freelance executive producer and writer and lives in east London. She is the author of Constance: The Tragic and Scandalous Life of Mrs Oscar Wilde and Desperate Romantics: The Private Lives of the Pre-Raphaelites.
GOR008441989
9780241964569
0241964563
Turner: The Extraordinary Life and Momentous Times of J. M. W. Turner Franny Moyle
Franny Moyle
Gebraucht - Sehr Gut
Broschiert
Penguin Books Ltd
2017-05-25
528
N/A
Die Abbildung des Buches dient nur Illustrationszwecken, die tatsächliche Bindung, das Cover und die Auflage können sich davon unterscheiden.
Dies ist ein gebrauchtes Buch. Es wurde schon einmal gelesen und weist von der früheren Nutzung Gebrauchsspuren auf. Wir gehen davon aus, dass es im Großen und Ganzen in einem sehr guten Zustand ist. Sollten Sie jedoch nicht vollständig zufrieden sein, setzen Sie sich bitte mit uns in Verbindung.