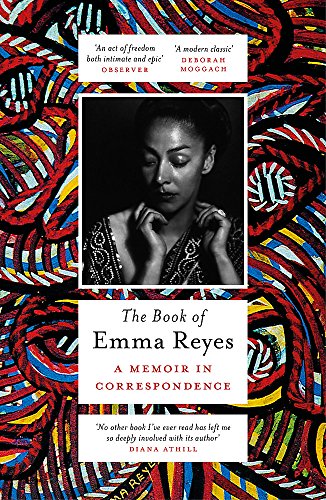 The extraordinary, posthumously published memoir in letters of a Colombian artist whose writing was championed by Gabriel Garcia Marquez - 'startling and astringently poetic' The New York Times

The Book of Emma Reyes: A Memoir in Correspondence Emma Reyes

In this startlingly original memoir, composed of twenty-three letters written over the course of thirty years, Emma Reyes describes in vivid, painterly detail the remarkable courage and limitless imagination of a young girl growing up with nothing. Hailed as an instant classic when first published in Colombia in 2012, nine years after the death of its author, the portrait that emerges from this clear-eyed account inspires awe at the stunning early life of a gifted writer and artist who was encouraged in her writing by Gabriel Garcia Marquez, but whose talent remained hidden for far too long.
The moment I finished this memoir I read it again - one simply can't abandon Emma. And I've been speculating ever since about how she made it once she'd escaped her terrible childhood. One is deeply grateful to know as a fact - an almost inconceivable fact - that she triumphed, but longs to know how. No other book I've ever read has left me so deeply involved with its author, and so grateful for that involvement -- DIANA ATHILL
Unadulteratedly good, interesting and important. Emma's letters remind me what reading and writing are for -- LOUISA YOUNG
What an astonishing book - I read it in a single gulp. Emma Reyes had a childhood of staggering deprivation but her humour and resilience shine through, and suddenly we have a modern classic -- DEBORAH MOGGACH
A jewel of a book. Emma is a mesmerising storyteller and her letters had me completely gripped from beginning to end -- NINA STIBBE
As poetic as it is horrific. The young Emma injects magic into the realism and vice versa - not for nothing is Reyes a compatriot of Marquez . . . an act of freedom both intimate and epic -- Ed Vuilliamy * OBSERVER *
Startling and astringently poetic . . . It's not hard to see what Marquez admired in [Reyes'] writing . . . she has a similar gift for relating extraordinary moments with a straight face, making them seem even more otherworldly. The most sophisticated aspect of this book is just how meticulously Reyes maintains the perspective of a child throughout . . . moving . . . potent and, against all odds, even lovely * THE NEW YORK TIMES *
A mesmerising account full of the most striking details. Reading her words pitches the reader head first into a wondrous, terrifying world -- Eithne Farry * SUNDAY EXPRESS *
The memoir, in letters, of the Colombian artist Emma Reyes, takes you from her birth in a Bogota slum to the artistic circles of Frida Kahlo and Diego Rivera. It's totally transporting -- Sam Baker * THE POOL *
An incredible biography by any measure, but the book's most startling element is Reyes's clear-sighted, unsentimental remembrance of her difficult childhood * PARIS REVIEW *
Reading the letters collected in this striking memoir, it is hard not to keep returning to the fact that their author was completely illiterate until her late teens...So eloquently does Reyes depict herself as a flawed witness to her own life that what emerges, paradoxically, is the portrait of a brilliantly assured observer and writer. It is Reyes's natural talent, even more than her story, that makes The Book of Emma Reyes remarkable * TLS *
Some works of art feel more unlikely, more miraculous than others, and Emma Reyes's remarkable epistolary memoir is one of them. I don't think I've read many books of such power and grace, or that pack such an emotional wallop in so short a space. The very fact that this book exists is extraordinary. Everything about it . . . is astonishing -- DANIEL ALARCON, from the Introduction
Emma Reyes (1919-2003) was a Colombian painter and intellectual whose letters were first published in 2012. She grew up in extreme poverty and escaped a convent for orphan girls at age nineteen. Illiterate, she travelled wherever she could and dedicated most of her life to painting and drawing, slowly breaking through as an artist and forging friendships with some of the most distinguished European and Latin American artists, writers and intellectuals of the twentieth century. She lived in Buenos Aires, Montevideo, Jerusalem, Washington and Rome before settling in Paris. The year she passed away, the French government named her a Knight of the Order of Arts and Letters.
GOR009377370
9781474606615
147460661X
The Book of Emma Reyes: A Memoir in Correspondence Emma Reyes
Emma Reyes
Gebraucht - Wie Neu
Broschiert
Orion Publishing Co
2018-08-09
192
N/A
Die Abbildung des Buches dient nur Illustrationszwecken, die tatsächliche Bindung, das Cover und die Auflage können sich davon unterscheiden.
Das Buch wurde gelesen, ist aber in gutem Zustand. Alle Seiten sind intakt, der Einband ist unversehrt. Leichte Gebrauchsspuren am Buchrücken. Das Buch wurde gelesen, sieht jedoch noch wie neu aus. Der Bucheinband weist keine sichtbaren Gebrauchsspuren auf. Gegebenenfalls ist auch ein Schutzumschlag verfügbar. Keine fehlenden oder beschädigten Seiten, keine Risse, eventuell minimale Knicke, keine unterstrichenen oder markierten Textstellen, keine beschrifteten Ränder.