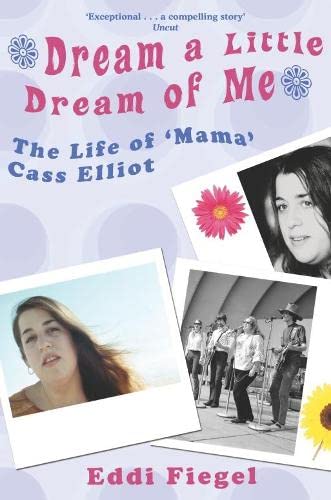 Dream a Little Dream of Me Eddi Fiegel

First decent, full biography - and effective rediscovery of Cass Elliot, Mama Cass of the Mamas and the Papas

Dream a Little Dream of Me: The Life of 'Mama' Cass Elliot Eddi Fiegel

'The greatest white female singer ever' is how Boy George described pop icon Cass Elliot, the sixties diva who was at the epicentre of US popular culture and music during the Californian hippy movement. Hailed as America's answer to the Beatles, the Mamas and the Papas' hits such as 'California Dreamin' and 'Monday Monday' became the soundtrack of a generation. Cass's uniquely emotive voice, charismatic wit and outsized multicoloured kaftans singled her out as a popstar who refused to conform to traditional female stereotypes. When she left the Mamas and the Papas, she immediately had a top ten hit with her debut single, 'Dream a Little Dream of Me' and became the queen on Los Angeles society. Her Beverly Hills villa was the scene of legenday parties, becoming the second home of stars such as Jack Nicholson and Grace Slick, but there was a darker side to her fame - after years of continuous dieting and drug addiction, she died mysteriously in London at the age of 33.

Including interviews with Cass's friends and family, co-band members Michelle Phillips and Denny Doherty, and many of the famous names who knew her, this is both an insightful biography of an extraordinary singer, and a fascinating glimpse into free-living, free-loving ideals of the sixties as the optimism of the flower-child generation was crushed by the Vietnam War.

'The product of over 100 interviews and four years of research across three continents, it's a fantastic read that goes way beyond thorough . . . Fiegel's fine, all-encompassing tome restores much of the great woman's dignity' - Mojo