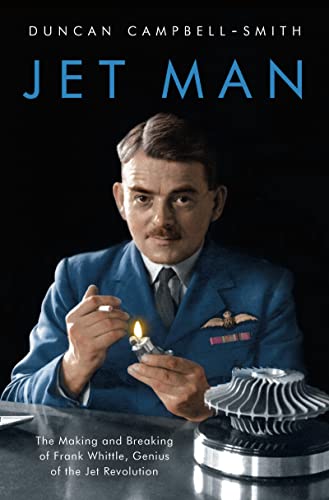 The biography of Frank Whittle - RAF pilot, mathematician of genius, inventor of the jet engine and British hero.

Jet Man: The Making and Breaking of Frank Whittle, Genius of the Jet Revolution Duncan Campbell-Smith

The story of Frank Whittle - RAF pilot, mathematician of genius, inventor of the jet engine and British hero.

In 1938, a thirty-one-year-old RAF pilot and engineer named Frank Whittle - given special leave to pursue his own startlingly original concept of flight - presented the Air Ministry with a written proposal for a revolutionary jet-powered fighter aircraft. A ready response might have changed the course of history, but Whittle got no reply.

In this gripping and insightful biography, Duncan Campbell-Smith charts Whittle's success at building a pre-war jet engine against all the odds - and tracks his desperate struggle to have it launched into active service against Hitler's Luftwaffe. It arrived too late - but nonetheless transformed the future of aviation.

'Wonderful at evoking Whittle's extraordinary creative ideas, his mathematical ability, his charm, the support he received, his lack of political nous, as well as the sometimes appalling treatment he received' -- David Edgerton, TLS
'A fascinating account' * Aeroplane Monthly *
'A long overdue corrective account of an extraordinary man' -- James Hamilton-Paterson
'Casts new light on the intense, heroic character of Frank Whittle and his revolutionary invention' -- Leo McKinstry
'There's much to ponder in this biography of a stoic and overlooked British hero' * Choice Magazine *
A fine, deeply researched book... [It] does great credit to a true aviation pioneer' * Military History *
The author has done a first rate job in illuminating the struggles of this engineering icon in such a gripping manner. That he has made such good use of Whittle's notes and diaries is evident and adds so much to the book. As such, I expect it will become an historical document of some importance... This book is highly commended to all those with an interest in aviation, be they aircraft or engineering enthusiasts' * Pennant *
'An important and stimulating addition to the literature and highly recommended' -- The Aviation Historian
'[A] thorough dissection of the evolution of the jet engine. Campbell-Smith has climbed every mountain of paper records unearthing the numerous political and technical hurdles from primary sources... I recommend this mighty tome unreservedly' * Journal of Aeronautical History *
Duncan Campbell-Smith is a former Financial Times and Economist journalist whose career has also included working in the City, consulting with McKinsey & Co and a short stint in the world of corporate communications. His previous books include Struggle for Take-Off, A History of British Airways (1986). He won the Wadsworth Business History Prize for his authorised history of the Royal Mail, Masters of the Post (2011).
NGR9781788544696
9781788544696
1788544692
Jet Man: The Making and Breaking of Frank Whittle, Genius of the Jet Revolution Duncan Campbell-Smith
Duncan Campbell-Smith
Neu
Gebundene Ausgabe
Head of Zeus
20201210
560
N/A
Die Abbildung des Buches dient nur Illustrationszwecken, die tatsächliche Bindung, das Cover und die Auflage können sich davon unterscheiden.
Dies ist ein neues Buch - lesen Sie als Erster dieser Kopie. Mit unberührten Seiten und einer perfekten Bindung kann Ihre brandneue Kopie zum ersten Mal geöffnet werden.