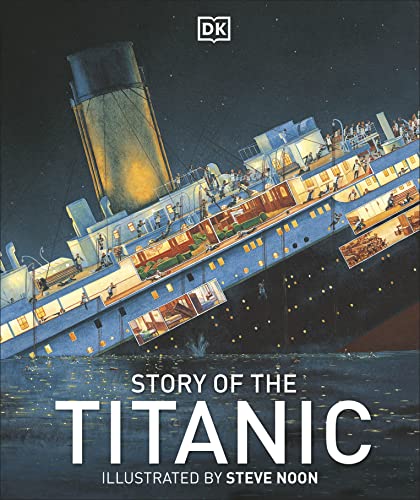 Story of the Titanic DK

Presents and dissects one of the most tragic events of the 20th Century in a dramatic insight into the Titanic's construction and fit-out, to its maiden voyage. This title includes the tales of the people on board including the captain, members of the crew, and passengers from first, second, and third class.

Story of the Titanic DK

The true story of the world's most famous ship is retold in this beautiful book with stunning visuals and a gripping narrative.

One fateful night in 1912 the so-called Ship of Dreams turned into a nightmare in the Atlantic Ocean after hitting an iceberg and sinking on its maiden voyage.??

The tragedy of the Titanic is shown in dramatic original illustrations by award-winning artist Steve Noon. This luxurious liner still has the power to capture public imagination more than any other vessel in history and more than a century later. From being built and setting sail to sinking fast and saving lives, theTitanic is explored and explained in fascinating detail with intricate cutaway scenes and cross-sections. ??

Meet the captain, crew, and passengers from all walks of life who lost their lives or survived the sinking. Discover exactly what happened on the disastrous voyage, the reasons why Titanic sank, and what lessons were learned for the future. Watch the drama unfold as ordinary people became unsung heroes and the supposedly unsinkable ship became an underwater wreck.??

Whether you're a history buff or simply seeking help for a school project, this is the ultimate tribute to Titanic.