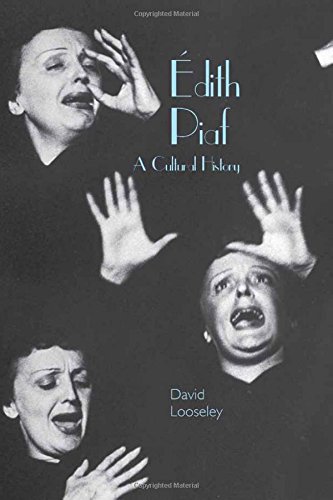 The world-famous French singer Edith Piaf (1915-63) was never just a singer. This book suggests new ways of understanding her, her myth and her meanings over time at home and abroad, by proposing the notion of an 'imagined' Piaf.

An Open Access edition of this book is available on the Liverpool University Press website and through Knowledge Unlatched. The world-famous French singer Edith Piaf (1915-63) was never just a singer. Dozens of biographies of her, of variable quality, have seldom got beyond the well known and usually contested 'facts' of her life. This book suggests new ways of understanding her. A 'cultural history' of Piaf means exploring her cultural, social and political significance as a national and international icon, looking at her shifting meanings over time, at home and abroad. How did she become a star and a myth? What did she come to mean in life and in death? At the centenary of her birth and more than fifty years after her passing, why do we still remember her work and commemorate her through the work of others, from Claude Nougaro and Elton John to Ben Harper and Zaz, as well as in films, musicals, documentaries and tribute acts around the world? What does she mean today? The book proposes the notion of an imagined Piaf. To a large extent, she was her own invention, not only by virtue of her talent but because she produced narratives about herself, building a mystery. But she was also the invention of others: of those she worked with but above all of her audiences, who made their own meanings from her carefully staged performances. Since her death, the world has been free to imagine new Piafs. From the 1930s until today, she has variously embodied conceptions of the 'popular' and of 'chanson' as a new kind of middlebrow, of gender, sexuality, national identity and the human condition.
Reviews 'It is a sharp and profoundly satisfying book, exposing in a sympathetic way the contradictions of the artist as well as the cultural complexities of her persona. this book is sure to become an important reference point for students and scholars of French Studies and Popular Music Studies alike, and an essential blueprint for future French music studies.'
Barbara Lebrun, Modern Contemporary France
'Looseley's enthusiasm for Piaf pervades this book ... This cultural study is written with scrupulous attention to detail and accuracy and has a comprehensive chronology, notes and index.'
The Franco-British Society
'David Looseley's volume is an indispensable reference for anyone interested in the complexity behind the mythical figure of Piaf and it provides an admirable model for a searching analysis of the myth making machinery of popular music.'
Peter Hawkins, Popular Music
'Looseley's book offers a compelling way of rethinking the mythology of Piaf while still addressing its power through narratives, especially his analysis of her early career. He nimbly moves between the dramatic narratives of Piaf's affairs and scandals, while at the same time addresses how their public consumption reflected significant changes in French society.'
Indiana University Northwest
'All in all, this outstanding study is unmissable for anyone interested in Piaf, France, French culture in the globalized world, and - more generally - the importance of properly understanding popular culture.'
Hugh Dauncey, French Studies
'Edith Piaf: A Cultural History is a rich, well-researched, rigorous book, with brilliant analyzes, as in the case of the song Three Bells, and lucid reflections on phenomena such as the popular voice, the divas or the future of tragedy today. Looseley also develops the concept of middlebrow which can, in my opinion, become a hermeneutical tool very relevant in the French context and elsewhere. And it is also and above all a well written text, which reads like a story, like a parable of contemporary French popular culture, its myths, its actors, its mediations and its audiences, all the more interesting that it is complexified, questioned systematically, without any certainty, not even that of the continuity of the myth Piaf, is free of suspicion. These qualities have just been recognized by the awarding of the literary prize of the Franco-British Society for the year 2015.'
Isabelle Marc, Volume! The French journal of popular music studies
David Looseley is Emeritus Professor of Contemporary French Culture at the University of Leeds and the author of Popular Music in Contemporary France: Authenticity, Politics, Debate (Berg, 2003)
Acknowledgements

Part I: Narrating Piaf
1 Inventing la Mome
2 Piaf and her public
3 A singer at war