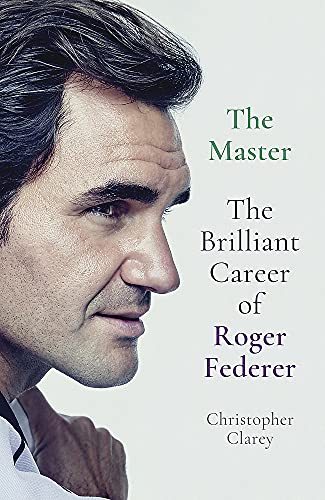 A major biography of the greatest men's tennis player of the modern era.

The Master: The Brilliant Career of Roger Federer Christopher Clarey

Widely regarded as one of the greatest ever sportspeople, Roger Federer is a beloved as a phenomenon, a symbol of enduring greatness and yet is intensely private. But his path from temperamental, bleach-blond teenager with dubious style sense to one of the greatest, most self-possessed and elegant of competitors has been a long-running act of will, not destiny. Based on 20 years of one-on-one interviews with Federer and with wide access to Federer's inner circle, including his coaches and key rivals, legendary sports reporter Christopher Clarey's account will be a must-read retrospective for the loyal sports fan, and anyone interested in the inner workings of unfaltering excellence. The Master tells the story of Federer's life and career on both an intimate and grand scale.
Roger Federer is the most beautiful and balletic player I've ever seen. In this entertaining and deeply researched book, Christopher Clarey, the top tennis writer of today, tells the story of how Federer became one of our sport's greatest champions and how much harder it was than he made it look -- Billie Jean King, former World No. 1 professional tennis player

Style married with substance. Heft married with levity. Polished, detail-oriented, executed with grace. Roger Federer gets the biography he deserves

-- L. Jon Wertheim, Sports Illustrated executive editor and bestselling author of THIS IS YOUR BRAIN ON SPORTS
Roger Federer plays tennis like Michelangelo painted: every stroke is perfection, the end result a masterpiece. Christopher Clarey captured just that -- Martina Navratilova, former World No. 1 professional tennis player
Christopher Clarey is a rare combination: the consummate insider with an objective lens. With THE MASTER, he delivers a deep and enlightening view of Roger's life and career that sports fans will be parsing for decades -- Jim Courier, former world No. 1 and four-time Grand Slam singles champion

An iconic master in his own field, Christopher Clarey is the perfect writer to wrap up the gift that is Roger Federer's career. You're not going to get a better look into his life, personality, and character. Christopher got close but not too close to Roger to compromise his perspective on this great champion. He shows sides and layers of Roger through conversations and stories that we have never been privy to before. I have deep respect for Christopher's fair and thoughtful journalism