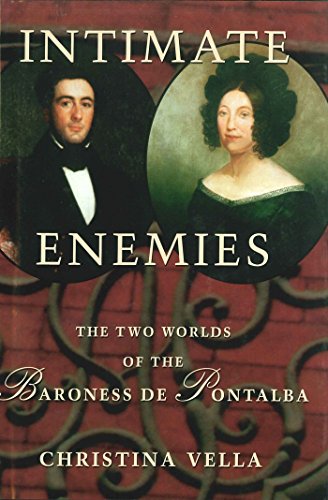 Born into wealth in New Orleans in 1795 and married into misery 15 years later, the Baroness Micaela Almonester de Pontalba led a life ripe for novelization. This volume, however, is the true account of this resilient woman's life and the three men who affected its course.

Born into wealth in New Orleans in 1795 and married into misery fifteen years later, the Baroness Micaela Almonester de Pontalba led a life ripe for novelization. Intimate Enemies, however, is the spellbinding true account of this resilient woman's life -- and the three men who most affected its course.

Immediately upon marrying CA (c)lestin de Pontalba, Micaela was removed to his family's estate in France. For twenty years her father-in-law attempted to drive her to abandon CA (c)lestin; by law he could then seize control of her fortune. He tried dozens of strategies, including at one point instructing the entire Pontalba household to pretend she was invisible. Finally, in 1834, the despairing elder Pontalba trapped Micaela in a bedroom and shot her four times before turning his gun on himself.

Miraculously, she survived. Five years later, after securing both a separation from CA (c)lestin and legal power over her wealth, Micaela focused her attention on building, following in the footsteps of her late, illustrious father, AndrA (c)s Almonester. Her Parisian mansion, the HAtel Pontalba, is today the official residence of the American embassy in France; and her Pontalba Buildings, which flank Jackson's Square in New Orleans, form together with her father's St. Louis Cathedral, Presbytere, and Cabildo one of the loveliest architectural complexes in America.

As for CA (c)lestin, he eventually suffered a total physical and mental breakdown and begged Micaela to return. She did so, caring for him for the next twenty-three years until her death in 1874.

In Intimate Enemies, Christina Vella embroiders the compelling story of the Almonester-Pontalba alliance against a richly woven background of the events and cultures of two centuries and two vivid societies. She provides a window into the yellow fever epidemics that raged in New Orleans; the rebuilding of Paris, the Paris Commune uprising, and the Second Empire of Napoleon III; European ideas of power, class, money, marriage, and love during the baroness' lifetime and their inflection in the New World setting of New Orleans; medical treatments, legal procedures, imperial court life, banking practices, and much more.