Have a Cigar! Bryan Morrison 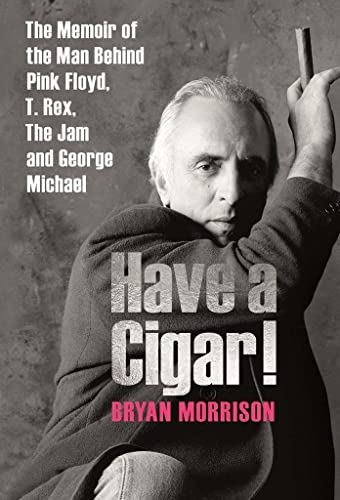 Have a Cigar! Bryan Morrison

Have a Cigar! is the candid and outspoken memoir of Bryan Morrison, the music business mogul behind the Pretty Things, Pink Floyd, T. Rex, The Jam and George Michael.

Have a Cigar!: The Memoir of the Man Behind Pink Floyd, T. Rex, The Jam and George Michael Bryan Morrison

When the music impresario Bryan Morrison died aged 66 in 2008, after two years in a coma following a polo accident, he left behind his unpublished memoir. As a music publisher, manager and agent, Morrison had represented the Pretty Things, Pink Floyd, T. Rex, The Jam, Wham! and many others. He was also the founder and owner of the Royal County of Berkshire Polo Club.

In this candid and outspoken book, Morrison reveals the true stories behind why Syd Barrett of Pink Floyd once bit his finger to the bone, the Pretty Things were banned for life from New Zealand, and he became involved with the Kray Twins. He also tells how The Jam kissed goodbye to success in the USA, he received death threats when Robin Gibb left the Bee Gees, and signing a publishing deal with George Michael and Andrew Ridgeley as Wham!

Spanning the golden age of British rock 'n' roll from the 60s to the 80s, this is the extraordinary story of a cigar-chomping, East End entrepreneur, with a passion for art and design, fashion, music and polo.
For me, reading 'Have a Cigar' was like finding a box in the loft that you had completely forgotten about which, upon opening, reveals treasures that have been locked away in your memory and transport you back in time... Even if you would not describe yourself as being a huge music fan, I defy you to not be gripped and sucked in by this cigar-chomping music impresario. -- Amanda Best * Haynet *
The book is written in an easy to read, down to earth style and tells of a lifestyle that could have stepped straight off the pages of a Jilly Cooper novel... Given the sheer force of personality that shines through on the pages of the book, it seems unsurprising that Morrison was attracted to the world of polo. As he says, 'A game of such intensity, skill, bravery and presence of mind that everything else pales into significance.' I read the book in one sitting; it is an incredible insight into Morrison's life and truly a privilege to have even a glimpse of the sheer force of nature he was as a businessman. -- Louise Broderick * Haynet *
The book reveals the often cut-throat nature of the music business and the chaotic and often destructive lifestyles of those involved... Have a Cigar is a riveting read, bouncing through his music business deals, a brush with The Krays, Bill Gibbs' fashion business disaster and Morrison's dogged determination to stick with recording artists he believed in. -- Nigel Carr * Louder Than War *
Have a Cigar! is a thrilling affair that takes the reader from the handy fists and feet of London's East End gangsters to the inner turmoil and confusion of Syd Barrett's by then Pink Floyd-less world. Morrison's account affords tremendous insight into the twilight world of the groups, the song publishing highs and lows, the gigs and parties; also putting a degree of flesh onto one or two particular stories, the skeletal bones of which are already known, especially to those who have geeked-out and freaked out to the myriad sounds that made up British psychedelia... It's an easy-going, hugely enjoyable read, the pages seemingly just turning by themselves as you wonder, eagerly awaiting to learn of what's going to happen next. -- Lenny Helsing * Shindig Magazine *
Have a Cigar! [offers] something for those interested in the backroom machinations of the rock business. And it highlights a long gone time when charismatic solo wheelers and dealers - maybe with a bit of shady partnerships - could make struggling performers into stars. -- Bob Ruggiero * Houston Press *
Bryan Morrison passed away following two years in a coma, but the publisher, manager and agent left the world with one final, unexpected gift: a candid, forthright memoir of a remarkable life. In Have a Cigar! The Memoir of the Man Behind Pink Floyd, T.Rex, The Jam and George Michael (Quiller Publishing, March 2020), Morrison shares tales of a unique life in the worlds of rock 'n' roll, fashion, design and polo. * Vinyl District *
Bryan Morrison studied art and design at St Martin's and the Central School of Art in the early 1960s before leaving to manage R&B group the Pretty Things. Within five years, the Bryan Morrison Agency grew to be one of the leading pop music agents in London, booking clubs, concerts and tours. Morrison also became the manager of Pink Floyd and through his publishing company he would later represent Marc Bolan of T. Rex, Robin Gibb of the Bee Gees, Paul Weller of the Jam, George Michael and many others. Morrison took up polo and joined the Guards Polo Club, where he first met, and later worked with, the Duchess of York's father, Major Ronald Ferguson. In 1985 he opened the Royal County of Berkshire Polo Club and is credited with making polo into a fashionable sport. In 2006 Bryan Morrison suffered a serious polo accident which left him in a coma. He died in 2008.
Introduction Prologue 1. How it all Began 2. Where is Michaelangelo Buried? 3. Oh, you Pretty Things 4. Don't Bring Me Down 5. Double Trouble 6. Crazy Diamond 7. King of the Rumbling Spice 8. A Safe Haven 9. Saved by the Bell 10. Helping Police with Enquiries 11. The Madcap Laughs 12. Art for Art's Sake 13. Fashion Victim 14. Going Underground 15. Careless Whisper 16. Wham! Bam! 17. Another Rock and Roll Christmas 18. The Game of Kings 19. A Field of Dreams 20. Reach for the Sky Epilogue Acknowledgements Select Bibliography Index
GOR010236186
9781846893087
1846893089
Have a Cigar!: The Memoir of the Man Behind Pink Floyd, T. Rex, The Jam and George Michael Bryan Morrison
Bryan Morrison
Gebraucht - Sehr Gut
Gebundene Ausgabe
Quiller Publishing Ltd
2019-09-09
224
N/A
Die Abbildung des Buches dient nur Illustrationszwecken, die tatsächliche Bindung, das Cover und die Auflage können sich davon unterscheiden.
Dies ist ein gebrauchtes Buch. Es wurde schon einmal gelesen und weist von der früheren Nutzung Gebrauchsspuren auf. Wir gehen davon aus, dass es im Großen und Ganzen in einem sehr guten Zustand ist. Sollten Sie jedoch nicht vollständig zufrieden sein, setzen Sie sich bitte mit uns in Verbindung.