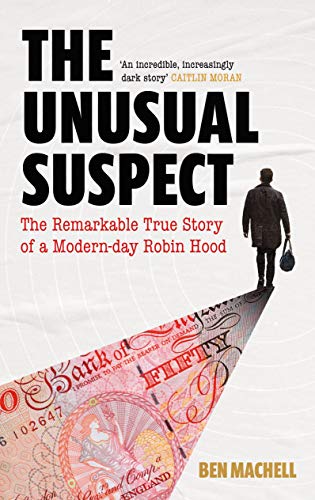 It is 2007, a time of recession and impending climate crisis, and one young man decides to change the world.

Meet Stephen Jackley, a British geography student with Asperger's Syndrome. Aged just twenty-one, obsessed with the idea of Robin Hood, and with no prior experience, he resolved to become a bank robber. He would steal from the rich and give to the poor.

Jackley used disguise, elaborate escape routes and replica pistols to successfully hold up a string of banks, making away with thousands of pounds. He committed ten robberies in south-west England over a six-month period and bank notes marked with 'RH' - 'Robin Hood' - began finding their way into the hands of the homeless. The police, despite their concerted efforts, had no idea what was going on or who was responsible. That is until Jackley's ambition got the better of him.

This is his story.

Completely fascinating . . . reads like a deep psychological thriller, but it's real. Is truth stranger than fiction? You bet -- LEE CHILD
A splendid account of Stephen Jackley that does full justice to his complexity * * Guardian * *
Stephen Jackley, the Robin Hood bank robber, is an Asperger's student with an incredible, increasingly dark story, which Machell tells with Hollywood box-office wit, compassion and brio. With every page, you find yourself screaming OH MY GOD - WHAT ARE YOU DOING, STEPHEN?, all the way up to him ending in US jail. How one young man's misguided plan to save the world went increasingly, dangerously wrong -- CAITLIN MORAN
Truly affecting true crime. I've heard it said that a villain is just a victim whose story hasn't been told - this big-hearted, fascinating, meticulous book made me feel that way about Stephen Jackley -- MARINA HYDE
Ben Machell's deeply reported book is not only a gripping true-crime story, but also a sensitive and melancholy portrait of someone who has long struggled to fit in to society * * New Statesman * *
An astonishing story which resonates at a time of staggering inequality, and one which asks salient questions about wealth redistribution * * Esquire * *
Meet Stephen: university student, bank robber, modern Robin Hood, human being. He was only good at one of them; thankfully it was the only one that mattered. A truly remarkable story -- TERRY HAYES, author of I AM PILGRIM
Was Stephen Jackley a cynical attention-seeker, or an idealist fighting a broken system, or something else entirely? Whatever the truth, his story - superbly written, and expertly reported - reveals the troubling place of finance in the centre of all of our lives -- OLIVER BULLOUGH * * author of Moneyland * *
A gripping account of the unlikely criminal career of Stephen Jackley . . . Assured prose boosts Machell's stranger-than-fiction true crime narrative. This balanced and sympathetic look at a troubled young man should have broad appeal * * Publishers Weekly (starred review) * *

Ben Machell is a feature writer for The Times and The Times Magazine and a contributor to publications including VICE, ES Magazine and Esquire. He has been shortlisted for Feature Writer of the Year at the British Press Awards. Ben has full and exclusive access to Stephen and his surviving diaries, as well as access to law enforcement and the key characters involved in Jackley's story on both sides of the Atlantic.