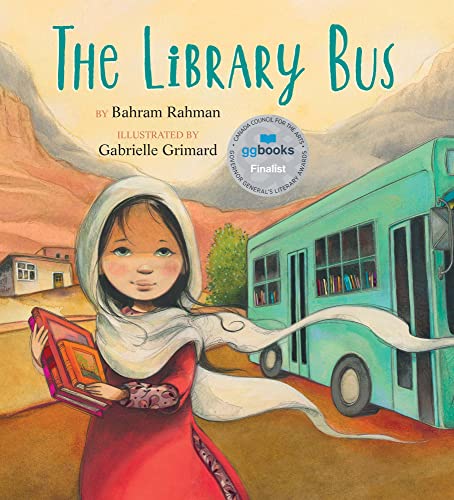 Inspired by Kabul, Afghanistan's first library bus and coloured by family memories, a touching snapshot of one innovative way girls received education in a country disrupted by war

Author Bahram Rahman grew up in Afghanistan during years of civil war and the restrictive Taliban regime. He wrote The Library Bus to tell new generations about the struggles of women who, like his own sister, were forbidden to learn.

It is still dark in Kabul, Afghanistan when the library bus rumbles out of the city. There are no bus seats-instead there are chairs and tables and shelves of books. And there are no passengers-instead there is Pari, who is nervously starting her first day as Mama's library helper. Pari stands tall to hand out notebooks and pencils at the villages and the refugee camp, but she feels intimidated. The girls they visit are learning to write English from Mama. Pari can't even read or write in Farsi yet. But next year she will go to school and learn all there is to know. And she is so lucky. Not long ago, Mama tells her, girls were not allowed to read at all.

Brought to life by the pensive and captivating art of award-winning illustrator Gabrielle Grimard, The Library Bus is a celebration of literacy, ingenuity, and the strength of women and girls demanding a future for themselves.

Praise for The Library Bus

STARRED REVIEW The conversational text is great for one-on-one sharing, but this will also come in handy at story times, for a celebration of reading, and for a glimpse of Afghani culture.-School Library Journal Starred Review

In a story inspired by the first library bus in Kabul, Afghanistan, where Rahman grew up during the civil war, it brings books to girls in remote villages and refugee camps who have no other access to education.-The New York Times

The girls' individualized faces and emotions will establish a bond with children everywhere as Rahman celebrates the brave and resourceful Afghani women teachers from his childhood who found creative ways to educate girls.-Booklist

An inspiring story that conveys the power of education-paying it forward and meeting avid readers where they are.-Kirkus Reviews

The reassuring watercolor and digital illustrations help convey Rahman's assertion that 'when you are born in war, you are truly unaware of the alternative, peace. War is your normal.'-The Horn Book Guide

Bahram Rahman, who worked as a gender equality activist in Afghanistan, delicately portrays in his first picture book the continued effects of the Taliban's prohibition on female education....Closed with an author's note sharing his connection to the story, The Library Bus extols the soaring spirit of those who value learning.-Shelf Awareness

Bahram Rahman's The Library Bus is inspired by growing up in Afghanistan and by the children he met during visits to orphanages and camps in Kabul....Gabrielle Grimard's characteristically warm style and her animated representation of Pari and the other children beautifully brings to life the vitality and potential of the girls in the book.-Quill & Quire

Although the book deals with heavy and complex themes, there is still a lightness to the story that attracts and engages young readers....The illustrations by Gabrielle Grimard are equally appealing and capture Rahman's tone and the power of books and education, while celebrating the bond between mother and daughter.-Asian Review of Books

The story is simple and heartwarming and underscores the importance of literacy and schooling for girls and gently points to the political challenges-repressive regimes, poverty, refugee camps-that preclude education for young girls.-The International Examiner

The Library Bus reminds us what a luxury it is to learn to read....Award-winning illustrator Gabrielle Grimard brings this story to life with water-colour paintings of the refugee camps, villages, and the little children who live there.-Montreal Review of Books

The Library Bus is a gentle day-in-the-life book that introduces readers to a beautiful country. Highly Recommended.-CM Magazine

Inspired by the first Library Bus to operate in Kabul, Bahram Rahman...has written The Library Bus to show how important it is for girls to be allowed to go to school....Gabrielle Grimard's pictures wrap around whole pages with watercolour and digital abandon.-Winnipeg Free Press

This nicely illustrated picture book looks at the importance of education for everyone. At the end of the book the author writes about what it was like growing up in Afghanistan.-Postmedia

The Library Bus by Bahram Rahman is a picture book, a gently told story of Pari and her mother who operates a library bus in Afghanistan....A great read to discuss the plight of refugees with young children.-The International Educator

This book was so accessible for both my kids and gave them such a rich introduction to the country of Afghanistan.-Kids Read the World

What a beautiful window into the lives of children in remote Afghanistan towns and refugee camps and the selfless service of those providing an opportunity for a brighter future.-jmebills