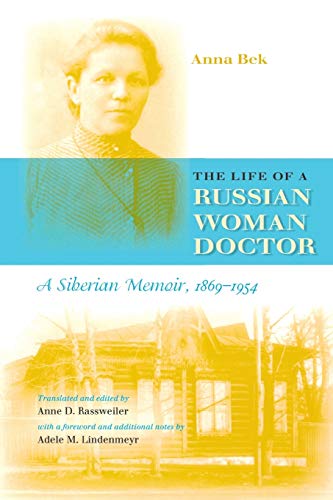 The Life of a Russian Woman Doctor Anna Bek

The story of an idealistic Russian woman doctor in pre- and post-revolutionary Siberia.

The Life of a Russian Woman Doctor by Anna Bek (1869-1954) yields rich insights into the lives of a generation of Russian women who lived at a time of revolutionary change, extraordinary challenges, and unprecedented opportunities. Written in a lively and compelling style, Anna Bek's memoir reveals not only the experiences but also the motives and values of women who sought education, independence, and self-sufficiency, the obstacles they encountered, and the influences of other women and men on their lives. This engrossing memoir also engages the special context of Siberian geography and history-the vast distances and isolation, the heterogeneous population of settlers, exiles, and convicts, the closeness and interdependence of families and communities, and the deep appreciation of nature. This book offers a rewarding excursion into Siberian social history and an intimate acquaintance with two exceptional individuals of great charm and courage-Anna Bek and her American editor, Anne D. Rassweiler.

During the past few decades, an increasing number of memoirs and autobiographies of a wide range of individuals who lived in Russia and the Soviet Union have appeared in English translation. This memoir by a woman physician and educator whose life spanned the years before the 1917 Revolution and the Stalin era is a welcome addition to this literature. The author, Anna Zhukova Bek, grew up in an isolated mining village in Eastern Siberia where her father was the mine director. Anna excelled at her studies and was sent to a boarding school for girls in Irkutsk. After graduation, she studied medicine in France and St. Petersburg. During a year's exile for political activity in Siberia, she met her future husband (who also was considered politically unreliable by the tsarist authorities), and the couple worked there until the husband's death from typhus in 1915. After 1917, Anna became a well-respected professor at several Siberian universities, but her specialties (psychology and pedology) became politically suspect by the early 1930s, and she was forced to give up these positions. The editor's annotations and notes are very helpful and informative. Summing Up: Recommended. Public and general collections.October 2005

The memoir's style is clear and the story is compelling. Furthermore, Rassweiler's introductions and annotations make the memoir usable for courses in Russian history, gender history, medical history, and general European history.July 2008

Adele Lindenmeyr is Professor and Chair, Department of History, Villanova University, and author of Poverty Is Not a Vice: Charity, Society, and the State in Imperial Russia.