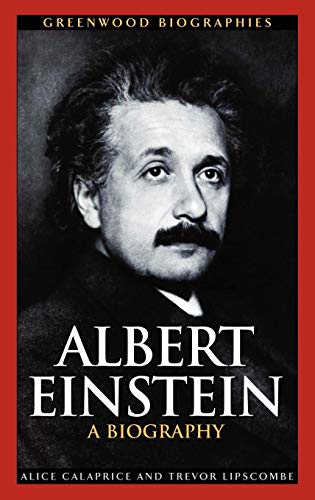 Readers will understand why he was named the Person of the Century by Time magazine.

Albert Einstein: A Biography will cover the entire history of this brilliant physicist's life and career, including: his early education, during which he was an excellent student, contrary to what is commonly believed;

Albert Einstein remains one of most famous scientists in world history. His image is instantly recognizable by even the most scientifically uninformed person-for many people, Einstein personifies genius. But who was Einstein really? What was he like as a person? What did his science actually mean? This fresh biography of Albert Einstein provides students and general readers a concise, accessible introduction to the life and science of this revolutionary man. Underneath his genius, Einstein was an ordinary person, with human frailties and weaknesses, but also with charm, modesty, a wry sense of humor, and idiosyncrasies. Readers will understand why he was named the Person of the Century by Time magazine.

Albert Einstein: A Biography will cover the entire history of this brilliant physicist's life and career, including: his early education, during which he was an excellent student, contrary to what is commonly believed; Einstein's struggles to find an academic position, which led him to work as a clerk at the Swiss patent office during the same period he was formulating his most famous and revolutionary theories; his troubled marriages and family life; Einstein's rise to international fame, and his use of that fame to fight for world peace; and Einstein's major contributions to physics, explained in ways that can be understood by anyone who wishes a fuller understanding of his scientific theories. The book includes a bibliography of secondary works that are useful for further reading, and a timeline of important dates in the life of Einstein.

In this book, written for high school students, the authors present a meticulously detailed account of Einstein's life from his birth in Ulm, Germany, to his death in New Jersey 76 years later....In addition to giving a detailed account of Einstein's life struggles and successes, the authors provide a concise timeline, highlighting important accomplishments, jobs, and family events....An appendix covers the interesting story of Einstein's famous brain. A detailed biography provides resource opportunities for future research. - The Science Teacher
[N]othing but praise for the fresh look and high-quality research that has gone into making this most agreeable and very readable contribution. - School Science Review
Calaprice and Lipscombe, a biographer and a physicist, provide students and general readers with a concise, accessible introduction to the life and science of Albert Einstein, emphasizing that underneath his genius, Einstein was a person with human frailties, charm, and a sense of humor. They detail his personal life as well as his education, his struggles to find an academic position, his contributions to physics, and his role as a champion of world peace. - SciTech Book News
[E]xplanations of the fiendishly difficult general and special theories of relativity in particular are wisely tackled with good earthbound analogies that satisfy the mind. - Astonomy Now
Many biographies have been written about Einstein; so why the need for yet another? Albert Einstein: A Biography focuses on the man as much as his science, considering his human weaknesses, his charm, sense of humor, and life. From his troubled marriages and family life to his rise to international fame and fight for world peace, Albert Einstein offers both depth and a lively presentation to make it hard to put down. - MBR Bookwatch

Alice Calaprice was senior editor at Princeton University Press for over 20 years, specializing in editing the sciences. She was in charge of editing and production of the Collected Papers of Albert Einstein and was administrator of the series' accompanying translation project. She is the author of several books on Einstein, including The Quotable Einstein.

Trevor Lipscombe Trevor Lipscombe was educated at the University of London and then at Oxford, where he obtained a doctorate in theoretical physics. He has published widely in quantum mechanics and statistical physics, two of Einstein's main areas of interest.