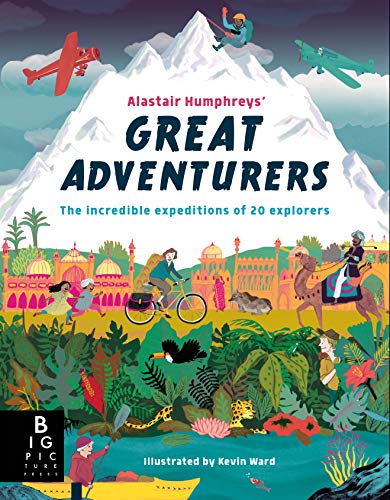 ** WINNER OF THE ORDNANCE SURVEY CHILDREN'S TRAVEL BOOK OF THE YEAR 2019 ** Hand-selected by Alastair Humphreys, read about the incredible journeys undertaken by twenty of the most heroic and impressive explorers who ever lived, including Ibn Battuta (14th-century explorer); Apsley Cherry-Garrard (a member of Scott's Antarctic expedition); Michael Collins (Apollo Moon mission astronaut) and Nellie Bly (who travelled round the world in less than 80 days). A wide-spread selection of explorers from young to old, male to female and with a range of abilities, these explorers crossed land, sea and sky in the name of adventure and may just inspire readers aged 7+ to do the same. Alastair Humphreys was named National Geographic Adventurer of the Year in 2012 for his work on the concept of microadventures.
This fantastic book tells the tales of 20 daring explorers who've shaped how we see the world through their daring escapades. Beautifully illustrated by Kevin Ward and with accompanying comics, it's jam-packed with facts that'll amaze and astound you. From Jacques Piccard's extreme deep-sea expeditions to Amelia Earhart's nerveracking flight across the Atlantic, these stories show how anything is possible if you put your mind to it. * National Geographic Kids *
"We all need heores, however young or old we are." Alastair Humphreys is a National Geographic Adventurer of the Year and his heroes make an eclectic mix - from Amelia Earhart to Wilfred Thesiger, including a number you might not have heard of. Fascinating. * Angels and Urchins *
One of National Geographic's Adventurers of the Year, Alastair Humphreys has taken time out from his roving adventures to select some of the incredible journeys undertaken by 20 of the world's greatest explorers. With inspiring tales from adventurers including Dervla Murphy and Laurie Lee, Great Adventures: The Incredible Expeditions of 20 Explorers, is the sort of book you buy for your kids and keep for yourself. Illustrated by Kevin Ward, this pictorial showcase of derring-do is aimed at kids aged seven and over but its cartoon strips, maps and charts are so charming and uncomplicated that it could happily bring a splash of colour to most coffee tables. Leaf through the world's 'worst journey' (Scott's Antarctic expedition), admire maps charting the flights of pioneering female aviators Amelia Earhart and Beryl Markham, and swot up on the inspiring world tour undertaken by wheelchair athlete Rick Hansen. * Nat Geo Traveller *
Did you know that when Dervla Murphy was 30, she set off on her simple, not-at-all-fancy bicycle and cycled from Dunkirk to Delhi? Or that she once crossed a river when the bridge had broken by holding onto a cow? What about prolific traveller Ibn Battuta, who left Morocco on a donkey aged 21 and didn't come home for 30 years? This is an inspiring introduction to 20 adventurers and explorers from the last 700 years, all of whom inspired the author to go adventuring himself, including four years of cycling around the world. Each adventurer's story is illustrated over two double-page spreads, featuring maps, stats, recipes, mini comics, kit lists, to-do lists and diary entries that are fascinating practical insights into the daily life of an adventurer. Reminding us that you do not need to be extraordinary or a genius to go on an adventure - you simply have to go - this book will encourage readers to live more adventurously, think a little more boldly and go a little further themselves * BookTrust *
Kevin Ward (Illustrator) Kevin Ward is a Canadian illustrator living in Madrid. He has created editorial illustrations, comics, books, animation, story games and is drawn to curious histories and travel. He is the illustrator of Alastair Humphreys' Great Adventurers (Big Picture Press), which was awarded the Edward Stanford Children's Travel Book of the Year, the ALCS Educational Writers Award and the Teach Primary Book Award for non-fiction. His picture book work was also selected for exhibition at the 2017 Bologna Children's Book Fair.
GOR009850434
9781783708413
1783708417
Alastair Humphreys' Great Adventurers Alastair Humphreys
Alastair Humphreys
Gebraucht - Sehr Gut
Gebundene Ausgabe
Templar Publishing
2018-08-23
96
N/A
Die Abbildung des Buches dient nur Illustrationszwecken, die tatsächliche Bindung, das Cover und die Auflage können sich davon unterscheiden.
Dies ist ein gebrauchtes Buch. Es wurde schon einmal gelesen und weist von der früheren Nutzung Gebrauchsspuren auf. Wir gehen davon aus, dass es im Großen und Ganzen in einem sehr guten Zustand ist. Sollten Sie jedoch nicht vollständig zufrieden sein, setzen Sie sich bitte mit uns in Verbindung.