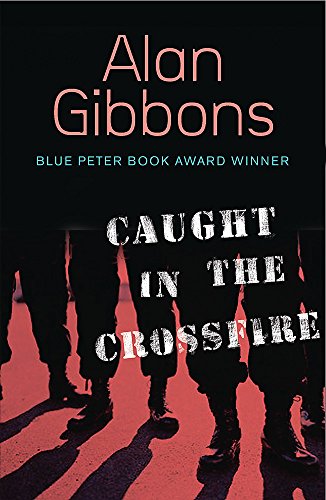 Caught in the Crossfire Alan Gibbons

Alan Gibbons at his most powerful and disturbing on race, riots and real life

Caught in the Crossfire Alan Gibbons

Set in a Northern town, where right-wingers are determined to stir up hatred and racial prejudice, CAUGHT IN THE CROSSFIRE is about six teenagers whose lives are woven together by a series of shocking and tragic events. A British Muslim brother and sister, two Irish brothers who take different sides, and two lads out looking for trouble: all of them get caught in the crossfire.
Inspired by the Oldham riots and the events of September 11th, this is a book that needed to be written. It is a chilling account of what is happening in Britain today, but as always Alan Gibbons writes with humour and understanding and is utterly on the wavelength of his many readers.

"Gibbons' writing often addresses worrying issues of social justice but never as powerfully as in this novel...There's a slice of real life in this book, and the writing - short, sharp pieces that take us into the mind of each character - is accessible and compulsive." -- Wendy Cooling The Bookseller, 19 November 2002 "...what engrosses one is the behaviour of the characters in the novel, who are so real, so human, that one could excpect to meet them at any time. As the complications, the animosities and solidarities develop towards the outbreak of the riots it is difficult to put the book down. The Ending is a dramatic climax." Socialist Review "Gibbons is a writer of great conviction and integrity." The Herald "...my 13-year-old son read the book obsessively through the night and was so deeply moved that he woke me at 3am to tell me. To keep a teenage boy awake all night , Gibbons must be one amazing storyteller" -- Sarah Johnson The Times, 19 February 2003 "pertinent...topical and tightly written" The Observer, 2 March 2003 ..a fast, intricate narrative that cuts skillfully from one group of people to another...The story rattles along, building up suspense and complexity without ever becoming confusing" -- Gillian Cross The Guardian, 12 April 2003 "Serious themes indeed, in a story well told, giving much to think about as the stones begin to fly. The book is pacey and written in short episodes." Booktrusted News (Booktrust), Spring 2003 "Returning to the episodic style that served him so well in The Edge, Gibbons turns his attention to small-town racial tension, festering in the aftermath of the World Trade Centre attack...The West Side Story/Romeo and Juliet motif provides the heart for thie challenging and plausible story." -- Lindsey Fraser The Guardian, 1 July 2003 "In unsparing detail this outstanding novel charts the build up to the race riot in a run-down northern town...At its heart is a touching Romeo and Juliet story of lovers from opposing sides...but its real strength is in the portrayal of of political manipulation, of wretched lives given a malign focus...Fast moving, unputdownable and frighteningly relevant" -- Jan Mark Carousel, Summer 2003 "I would recommend this book to anyone of any age just looking for a good read!" Teen Titles, Summer 2003

Alan Gibbons is a full-time writer and a visiting speaker and lecturer at schools, colleges and literary events nationwide, including the major book festivals. He lives in Liverpool with his wife and has four grown up children. He travels globally and is known the length and breadth of the country for his high profile Campaign for the Book and school visits.