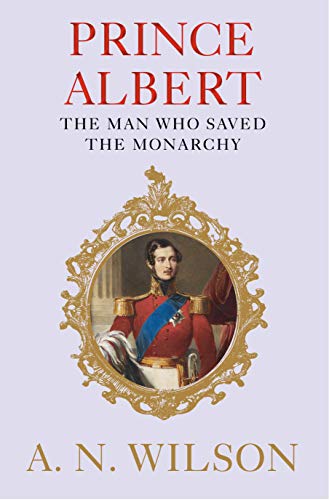 The magnificent and definitive biography of Prince Albert, by one of Britain's best biographers and the author of Victoria: A Life.

Prince Albert: The Man Who Saved the Monarchy A. N. Wilson

For more than six decades, Queen Victoria ruled a great Empire at the height of its power. Beside her for more than twenty of those years was the love of her life, her trusted husband and father of their nine children, Prince Albert. But while Victoria is seen as the embodiment of her time, it was Prince Albert, A. N. Wilson expertly argues, who was at the vanguard of Victorian Britain's transformation as a vibrant and extraordinary centre of political, technological, scientific and intellectual advancement. A composer, engineer, soldier, politician, linguist and bibliophile, Prince Albert, more than any other royal, was truly a 'genius'.

Wilson has produced in this biography what has hitherto been an oxymoron, a highly entertaining book about Albert. -- Daisy Goodwin * Sunday Times *
Mesmerising... An irresistible and informative read... A.N. Wilson's brilliant book is a treat: an absorbing and entertaining guide to the complex tensions of Albert's world. * The i *
Enthralling... [Wilson] writes so exuberantly and perceptively... What keeps his portrait so animated is not only the extensive use of primary sources - chiefly the correspondence lodged in the Royal Archives - but also a novelist's ability to make character vivid and narrative swift... Wilson's account of this remarkable man is unfailingly enjoyable and sharply astute. -- Rupert Christiansen * Daily Telegraph *
Wilson's approach is admiring, argumentative and astute. He is a brisk, irreverent revisionist who likes to find other people's ticklish points. -- Richard Davenport-Hines * The Times *
Subtle, amusing, gripping... Brilliant * Spectator *
This entertaining and beautifully illustrated account supports the claim that Albert was "the man who saved the monarchy." It also confirms that A.N. Wilson is one of those rare biographers with the gift of finding words "at once true and kind" in which to present the trickiest subject. * TLS *
Engrossing... Mr. Wilson makes good use of documents from the period and has consulted experts, particularly on details having to do with Albert's German background. His most striking contribution, though, is a psychologically astute approach to Victoria and Albert, one that results in a persuasive and humane account of their marriage. * Wall Street Journal *
Absorbing... [Wilson] argues persuasively that Albert's many talents helped reshape the monarchy, fitting it for the modern world and giving it a role in British society that has lasted to the present day. * Daily Mail, Books of the Year *
Waspish AN Wilson delights in stinging comfortable historical prejudices... Albert was a man of culture and intelligence who saved the British monarchy. * The Times, Books of the Year *
Incisive and entertaining -- Helen Rappaport * Literary Review *
One of the pleasures of Wilson's book is the wit and verve with which it's written, and he does a fine job of reminding us of the many reasons to admire Albert. -- Kate Hubbard * The Oldie *
Absorbingly readable and impressively succinct. * Michael Hall, Country Life *
Thorough, well-written, and insightful -- Simon Heffer * New Criterion *
This lively, delicious portrait of Prince Albert by distinguished biographer Wilson shows how much the United Kingdom owes to Queen Victoria's adored consort (and cousin)... Anglophiles will relish the inside story of this royal personage. * Publishers Weekly *
Excellent... A delightfully vivid, opinionated biography that pays almost equal attention to Albert's wife and a colorful supporting cast of early Victorian notables. * Kirkus Reviews (Starred Review) *
A magnificently understanding biography of Victoria's spouse....Albert led a brief life-dying at age 42 - but his impact on his adopted homeland, Great Britain, especially on the functioning of the monarchy, was immense, hence the subtitle of this wise new portrait. That is the thesis Wilson develops, comfortably resting his narrative on two legs: complete thoroughness and joyful buoyancy. * Booklist (Starred Review) *
A. N. Wilson grew up in Staffordshire and was educated at Rugby and New College, Oxford. A Fellow of the Royal Society of Literature, he holds a prominent position in the world of literature and journalism. He is a prolific and award-winning biographer and celebrated novelist. He lives in North London.
1: Princess Beatrice's War Work 2: His Mother 3: The Wettins 4: Childhood: 'Tout rappelle l'homme a ses devoirs' 5: 'These dearest beloved Cousins': Albert's First Visit to England 6: European Journeys 7: A Somewhat Rough Experience 8: Unbounded Influence 9: Public Art, Public Life 10: Neptune Resigning His Empire to Britannia 11: Malthusian Calamity 12: Cambridge 13: The Year of Revolutions 14: Balmoral 15: The Great Exhibition of 1851: The Making of the Modern World 16: The Great Exhibition: 'so vast, so glorious' 17: Stormy Weather 18: The Prince Consort at Last 19: King in All But Name 20: The Care and Work Begin 21: She Was the Strong One
GOR011164631
9781782398332
1782398333
Prince Albert: The Man Who Saved the Monarchy A. N. Wilson
A. N. Wilson
Gebraucht - Sehr Gut
Broschiert
Atlantic Books
2020-07-02
448
N/A
Die Abbildung des Buches dient nur Illustrationszwecken, die tatsächliche Bindung, das Cover und die Auflage können sich davon unterscheiden.
Dies ist ein gebrauchtes Buch. Es wurde schon einmal gelesen und weist von der früheren Nutzung Gebrauchsspuren auf. Wir gehen davon aus, dass es im Großen und Ganzen in einem sehr guten Zustand ist. Sollten Sie jedoch nicht vollständig zufrieden sein, setzen Sie sich bitte mit uns in Verbindung.